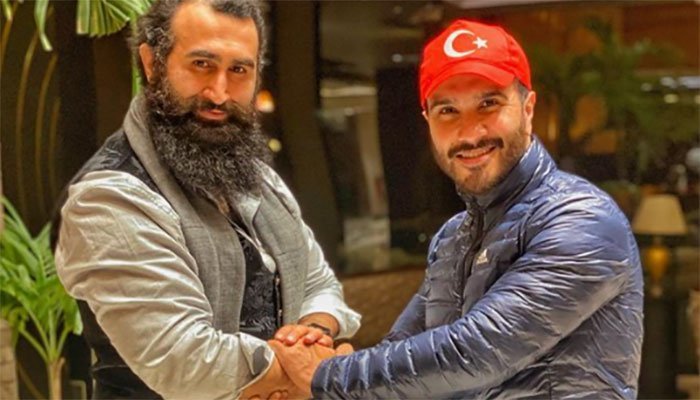 Great Turkish actor Celal AL aka Abdul Rehman from Turkish TV series Ertugrul Ghazi just met Pakistani talented actor Feroze Khan in Karachi. As we all know that Corona Virus pandemic ruined the whole of 2020. But during this time people utilized their free time being engaged in fruitful activities.

Similarly, one activity for not only the young ones but also for middle-aged people was to watch the Ertugrul Ghazi series. This is one of the best moral and history-based Turkish TV series released in 2014.

Turkish young actor Celal AL is best known for his role as a companion of Ertugrul Ghazi. And he is a famous as Abdul Rehman Alp. He has also worked in many famous TV dramas like Conquer and Kurlus Osman. Celal AL has nailed his role in the Ertugrul Ghazi series making the whole world to love his character with depth of heart. He owns a humble personality and grace.

Everyone knows that Turkish community shares a good bond with Pakistan as well. Similarly, actors of both countries adore each other a lot. Feroze Khan the Pakistani showbiz industry’s young actorwho just moved to religious learning has done many super hit projects.

In an Instagram story of Feroze Khan, he thanked Celal AL for the gifts that he brought with him Feroze. He also asked for positive love and response from the Pakistanis for the Turkish actors and for the whole Turkish nation. Celal commented on his post saying that Feroze is the one. Who deserved that artifact which he took for Feroze. Khan also appreciated Celal AL for his outstanding acting in the Turkish Drama Series Dirilis Ertugrul.

Feroze khan days ago also shared a post related to Ibn Arabi’s quote from the Turkish series Ertugrul Ghazi. As everyone knows that the great Khan announced a period ago that he’s going to leave showbiz. He said so because he quitted showbiz to follow and preach Islam with extreme devotion. But now he’s back again.

Celal AL also wished him the best of luck for a better future calling him “Brother” in his recent post’s comment. Celal AL has shared a story showing an immense love for Turk and Pak brotherhood. He also added love emoticons for showing the spirit of faith and compassion between the two countries. Turkish Actor Celal AL has also posted a picture of him with Feroze Khan when he landed in Karachi.

Both shared love and respect for each other. Celal Al also invited Feroze Khan to visit Turkey in a comment. In his reply, Khan replied: “InShaAllah Soon!”. It’s a good step to neglect all the superiorities. Smashing all the differences and meeting our Muslim brothers is a good initiative by our media industry actors.