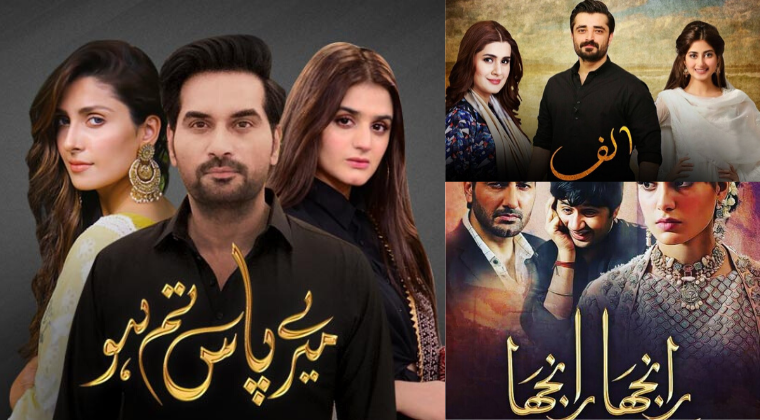 We know that if you came here, you are looking for the top 5 Pakistani Dramas of 2019 and 2020. Let’s give you an overview of which drama plays best in Pakistan in 2019.

The best way to spend free time specifically for women in Pakistan is to watch dramas while drinking a steaming cup of tea or coffee while shredding snacks. Well, we should be proud that Pakistani dramas are widely watched around the world. So, looking at the role of dramas for 2019, some have been marked as blockbuster series and here we have gathered a list of the top 5 unforgettable dramas of the year:

The drama series Mere Pass Tum Ho has been the talk of the day ever since. The drama’s main cast includes Ayeza Khan, Humayun Saeed and Adnan Siddiqui. It broke all previous viewer records that are still growing by the day. The story was written by Khalil-ur-Rehman Qamar while Nadeem Baig directed the drama series.

As for the theme of the piece, it is a rich composition of emotion that specifically defined the relationship between the couple over this period. You can watch it on ARY Digital every Saturday at 8 a.m. and if you missed the previous episodes, suggest watching it on YouTube. We believe that this play is among the top 5 dramas in Pakistan of 2019 and 2020.

This is our number 2 in the top 5 drama lists in Pakistan. This piece is based on a novel written by full-time bestseller Umera Ahmad. This is the most eagerly awaited series this year because Umera Ahmad never satisfied anyone with the story he moved emotionally. Another special aspect of this drama is that Hamza Ali Abbasi will be released after a good long time and fans will believe that if Hamza is there it will certainly be something special.

The main cast of the cast includes Hamza Ali Abbasi, Sajal Ali, Kubra Khan and Ahsan Khan. The drama series Alif is directed by Haseeb Hasan. The story of this piece revolves around the spiritual element and is the main attraction for the viewers. You can watch it every Saturday on Geo Entertainment at 8am.

Ranjha Ranjha Kardi is a spectacular year series for viewers. The story of this drama has proven that Pakistani dramas can take you out of the world with the great direction of Kashif Nisar and an in-depth philosophical plot by Faiza Iftikhar. The main role of this drama consists of Iqra Aziz, Imran Ashraf and Syed Jibran. Imran Ashraf played a character named Bhola whose fame touched the immortal grounds. If you want to see how the new talent from the drama industry strives to highlight excellence in acting, Ranjha Ranjha Kardi is undoubtedly the best example. This blockbuster has been put on Hum TV and you can watch it on YouTube in case you missed it.

Do Bol is one of the most-watched dramas from 2019 with a great story that is very different from the traditional serials. While Hira Mani was not considered a prominent actor in the industry prior to this drama, it wouldn’t be wrong to say that this project has also turned out to be a talent show for Hira.

He proved that his choice for the character in Do Bol was correct. On the other hand, Affan Waheed acted as usual and thus the chemistry between Gaiti and Badar became a huge Pakistani hero. The drama was released on ARY Digital and if you missed it, you can watch it on YouTube.

Another addition to the hit dramas of 2019 and 2020 is Ehd-e-Wafa, which is not a romantic story but covers the amazing journey of four friends. The drama is production sponsored by ISPR and the theme is about how the four comrades try to make a living. The main characters of the play include Ahad Raza Mir, Osman Khalid Butt, Wahaj Ali, and Ahmed Ali Akbar. Ehd-e-Wafa is written by Mustafa Afridi and directed by Saife Hassan.